Pierre Jaquet-Droz was born in 1721 near La Chaux-de-Fonds. His older relatives from the Brandt-dit-Grieurin, Sandoz, and Robert families cultivated in him a passion towards clockmaking and precise mechanisms. His infinite love of nature and birds can be seen in all his designs. Animalistic and floral patterns are present on pendulum clocks, snuffboxes, pocket watches, and automatons. Jaquet Droz exported more than 600 pieces to China in 10 years, and they undoubtedly captivated the Qianlong Emperor’s attention. Jaquet Droz was the first watchmaker whose products were exported to the Forbidden City. Today many automatons and pocket watches are exhibited in the Imperial Palace Museum.

Hot enamel became the distinctive feature of Jaquet Droz pieces since the XVIII century. The artisans mastered the art of ideally shaped flat dial plate creation to perfection using powders of different graininess and choosing appropriate flames. Only they knew the magical formula which allowed creating dial plates unique both in color and texture. Enamel is a great timeless material, as it preserves its beauty and flair for centuries.

The Eclipse watch dial plate is decorated with 8 stars and the engraved Moon changing day after day. Grande Seconde model is one of the iconic ones by Jaquet Droz, as it has the tourbillion. This complicated mechanism is the greatest achievement in the watchmaking industry and serves as a guarantee of accurate timing.

For so many years, Jaquet Droz artists designed the dial plates of their watches with wonderful miniature paintings and relief decorations of birds. The Bird Repeater model created by the brand was first exhibited in November of 2012. It combined the best Jaquet Droz traditions, craftsmanship and aesthetics.

On the occasion of the brand’s 275th anniversary, the company organized a preliminary presentation of the The Charming Bird model at a unique mobile exhibition in Shanghai. It featured the first singing bird automaton on a watch in the world. While the Tropical Bird Repeater watch is a quintessence of Jaquet Droz designers and watchmakers’ craftsmanship, this one could be truly appreciated by a small number of gourmets only. A tropical garden is shining in flamboyant colors on a mother-of-pearl dial plate of the watch, which is enclosed in a red gold case.

In 2014, Jaquet Droz radically changed the watch mechanism. A silicon spiral and pallet fork with inverse lugs appear as essential parts. Silicon is a hard material, and only a few brands know how to treat it in a proper way in the watchmaking industry. 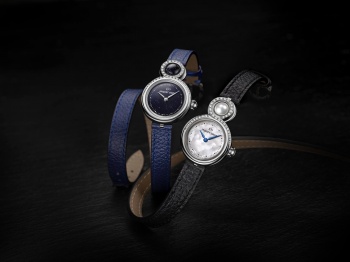 On the occasion of the 280th anniversary, Jaquet Droz invites everyone to feel the magical attraction of time expressed in exclusive items that combine uncommon design, exquisite materials, and unique watch technology.
Grande Seconde Moon Black Enamel: The Ode to the Moon